On the west side of Glover there are 17 Horse Chestnuts (along the cemetery) and on the east side 7 Horse Chestnuts are alternated with Western Red Cedars. Dr. Marr, Langley’s first resident physician, had a passion for gardening, and was responsible for planting of the street trees, as well as, Rhododendrons in the cemetery.

According to Bill, his father got the Horse Chestnuts from Walter Wilkie’s place where there were two huge trees on Glover in front of a circular driveway and the Wilkie home, just south of the Coulter Berry store. 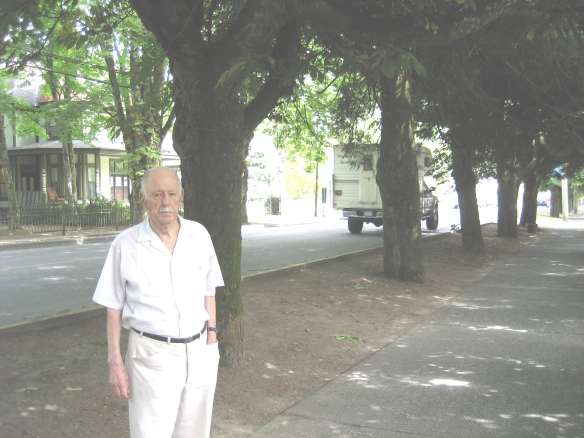 DR. BUTLER BENJAMIN MARR
Langley’s first resident doctor arrived in Fort Langley in 1910 as a physician with the Canadian Northern Railway. Dr. Butler Benjamin Marr was one of the principal doctors with his practice initially covering all of Langley Township, an area of 120 square miles, with many of his patients served by house calls

Dr. Marr enlisted in the Canadian Army in August 1914 and was initially posted overseas as a field officer in the Cavalry and then served in the Army Medical Corps. Upon his return in 1919, he resumed his practice in Fort Langley and was instrumental in establishing many wartime service organizations.

In 1929, the Langley Branch of the Legion asked Dr. Marr to lead a committee to investigate the building of a “cottage hospital” in Langley. He continued his practice until his retirement in 1936. For many years, he championed the need for a hospital in Langley but, sadly, suffered a heart attack in 1939 and died at age 57. While he never saw the opening of Langley Memorial Hospital in 1948, Dr. Marr, along with many others, can be credited for bringing medical care to the early residents of Langley.

A row of Horse Chestnuts in the Fort Langley Cemetery

HORSE CHESTNUT TREES IN THE CEMETERY
Dr. Marr and his wife Isabel are buried in the Fort Langley cemetery. Both Marr and his wife were very community-minded and involved in a wide variety of organizations. As returning soldiers, Dr. Marr and Archie Payne led the campaign to fund the cenotaphs at the Murrayville and Fort Langley Cemeteries. Both monuments were unveiled in April 1921. The stone cenotaph in Fort Langley is located at the front of the veterans’ section of the cemetery.